When I was in the K-POP community on Google Plus, I still remember being overwhelmed by the stage of IRON, who won second place in “Show Me the Money 3”. A rap like a soul screaming that shakes the deepest part of my heart.I got goosebumps when I saw all the performers of “Show Me the Money 3” impressed by his presence and expressiveness, and turned into Poisonous”

I got goosebumps when I saw all the performers of “Show Me The Money 3” impressed by his presence and expressiveness, and turned into a half-blurred white expression. (His face, which won the championship and became ikon’s Bobby, is also impressive.)

The song “Poisonous”, which was unveiled in the semi-finals, became number one on the sound source chart and became popular.

I go up more and more.

I have no money. I haven’t studied with the help of the country.

I didn’t have the money and stole my friend’s stuff.

But I never repeat my past like garbage. I will see a bigger world.

Don’t regret it at the end of my life.

I see a much bigger world. Even in a dirty life, I stand up again.

Don’t regret it at the end of my life.

However, it hurts me considering the feelings of his friend RM and now BTS members during a year.

Before his debut, IRON was active in the hip-hop crew. The crew included BTS leader RM, Kim Nam-jun, and BTS producer, Supreme Boi.


At the time of the “SHOW ME THE MONEY” broadcast, RM, who was concerned about Iron leaving the office, once made a comment to support Iron through BTS’s official Twitter account.

“Rap Monster supports IRON a lot. Brother, please do your best!” The wording is more complicated, but it means something like this.

Earlier, when RM was answering an interview, it was about stress.

“The stronger the light, the darker the shadow.”

RM said it calmly and I was very impressed with that. I think the shadow of IRON is still deeply engraved on the hearts of BTS 7 members.

But his routine was full of crime and public criticism.

In January 2021, he was charged with hitting the body of an 18-year-old student multiple times, and while he was being investigated, he fell to death on the balcony of an apartment in Seoul. It’s been found. He was only 29 years old.

Other criticisms of his lover’s assault, injury, intimidation, cannabis smoking, and irresponsible remarks about it were gathered. I have no intention of defending him in those cases, but I think the K-POP industry has lost an amazing talent after a year.

As we all know, IRON was a Big Hit entertainment trainee as an early BTS member.

And I think he had a close relationship with RM, or RM himself acknowledged the size of his existence. Of course, I love the current 7 BTS, but I think the early heavy rapper corps BTS was also a great group.

My favorite song is “HOOK”. rapping on this BTS sound, the entanglement of the two raps is exquisite, with light and outstanding stuff that rapping the complaints about young people.

If BTS is a super idol with an angelic image that saves time, I think early BTS is a stoic rap group with a strong underground color that is received by professionals, but I think both are extremely attractive.

HOOK (HOOK means something that will fly away quickly and disappear if you blow it.)

・The one part of the translation

He can seduce all the human ears here even if we don’t have any F-words He closed his eyes to the development of the song world, but the eyes of the masses are paparazzi

The hook song you sold, so it really ends up

OK OK It’s not a joke, it’s over here

BTS of Justice BTS of brave and his disappearing fluffy

IRON debuted in 2015after leaving Big Hit entertainment, in 2016 He’s released one album.

He also collaborated with RM on commercials and with SHINee’s Jonghyun on “Crazy”, where he performed a rap with a strong presence. (Unfortunately, Jonghyun himself died while his solo album was a hit. He also is a genius buried in the darkness of K-POP show business .)

Jonghyun was also an expressive genius singer with beautiful treble. The person he chose as a guest on his solo album was IRON. Its presence and expressiveness, which is not inferior to Jonghyun, and the interaction between the two were wonderful.

However, they are no longer there.

Now the seven members of BTS are at the top of the era.

It is not the will of the person that divided the life of RM and IRON, but the fate.

However, it is clear that IRON was the one and only person who had excellent talent as a rapper and an artist, and I would like to remember that he was an early member who laid the foundation for BTS today.

Now, let’s wait for the announcement of the new series of BTS made by 7 members!! 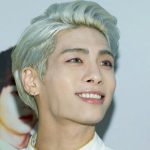